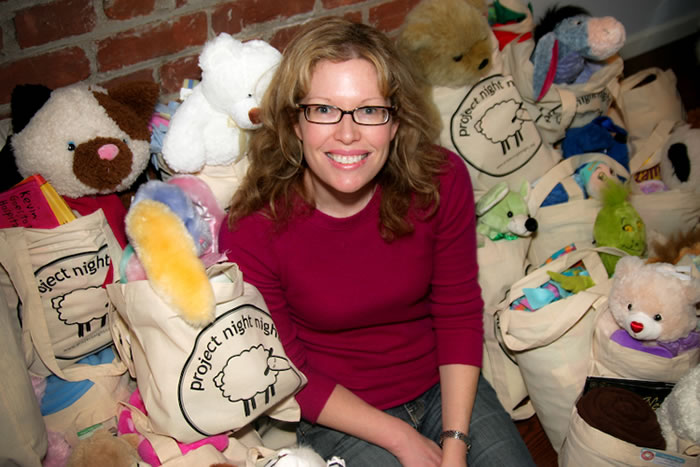 The little boy didn't know why they had to leave their home, but he went with his mother to a strange new place anyway. The room where they were going to sleep was bigger than his own room, but there were a lot of other people there, and it was crowded and noisy. Even though his mother was with him, he felt lonely. And afraid.

Then a strange woman appeared with a bag. "This is for you," she said. The boy grasped the bag and peered inside. There was a book, a blanket . and a bear. A friend, he thought. He looked over at his mother for reassurance and she smiled. "Thank you," he murmured to the strange woman who brought him the present. That night, the boy curled up close to his mother as they read together — just like they would have done at home. When she finished, he held on tight to the bear, and breathed a sigh of relief.

Project Night Night is a nationwide non-profit organization based in San Francisco, California. It exists to deliver Night Night packages to homeless children in the United States, each of which contains a blanket, a book and a stuffed animal. Executive Director, Kendra Stitt Robins began Project Night Night when, on a family vacation, it occurred to her that her young son was unable to sleep well away from home. While Robins soon learned to take his blanket, book and stuffed monkey with them when they traveled, she also realized that the problem was likely much worse for children who had no home.

Project Night Night began in 2005. That year, 1,200 Night Night packages tied with ribbons were delivered. Soon after, Robins was contacted by a shelter manager. "She asked us to deliver the packages in tote bags instead. She said that when children leave, they need something to carry everything in." That's when Robins began looking around for tote bags. And that's when she discovered 4imprint®.

The great thing about the 4imprint® tote bags that deliver Night Night packages is that they house the book, blanket and stuffed animal for a child, all of which then belong to a child that otherwise has nothing. In fact, homelessness is more common in the United States than one may think. Many people don't know that one in 50 children in the United States will face homelessness at some point in their life. "Sometimes it's really sad," Robins says. "Sometimes you see a child and think, 'I can't believe you've never had anything new before.'"