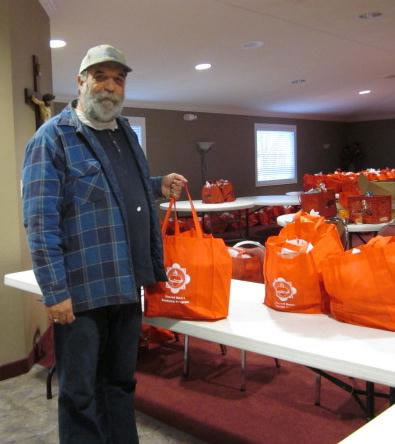 The volunteers from Sophia's Offering from Angels Kitchen were packed up and ready to call it a night. Surrounding them were hundreds of bright red bags, filled to the brim with donated food items and ready to be given those in need over the holiday season. The Christmas basket program had come a long way since its humble beginnings.

More than a dozen years ago, a homeless man waited for parishioners to file out after Mass ended at Sacred Heart Catholic church before he approached the Father. The man humbly asked for something to eat. The priest took him to the kitchen where he made a peanut butter and jelly sandwich to help stem the man's hunger. The man went away, grateful for the kind gesture. The next day he came back with other hungry people in tow; the priest fed them all that he could.

This was the beginning of Sophia's Offerings for Angels Kitchen.

What started as just one sandwich for a man has turned into the largest soup kitchen in Peoria, Ill., serving thousands of people each week.

Once a year during the holiday season, Sophia's Offerings from Angels Kitchen takes its philanthropy one step further; volunteers assemble Christmas food bags to hand out to the community.

In years past, the food given to the needy during the Christmas basket program was packaged in anything the volunteers could get their hands on — plastic and paper bags, cardboard boxes or tubs. However, the contents would tear holes in the plastic bags and the weight would rip the handles from the paper bags. There always seemed to be a shortage of cardboard boxes, and boxes can't be taken on the bus.

This year, thanks to 4imprint® and the one by one® program, the volunteers no longer had faulty bags and boxes to pass out the Christmas food baskets. With sturdy cloth red bags, the volunteers were able to securely pack the donated food.