Guardians of the Children 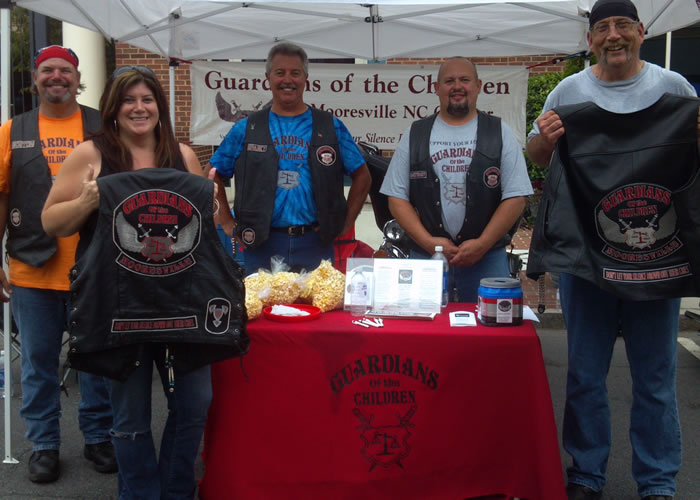 To say that Guardians of the Children (GOC) simply educates the public on how to recognize child abuse is a vast understatement. From fundraisers to working with the DSS [Department of Social Services] and from organizing informational booths at city and regional events to accompanying young children to court, Guardians of the Children does it all. Even, according to the Mooresville, North Carolina chapter Vice President Rich Grassley, "physically restraining someone from the child."

Rich and his fellow "motorcycle enthusiasts" work hard to raise money and generate awareness for children of abuse. They are part of nationwide organization dedicated to ". serv[ing] as advocates to provide strength and stability to families in crisis; and be an answer to the prayer of an abused child or teen for courage, support and protection." Sometimes that means "adopting" kids, not that the child lives with a member of the group, but that visits to the doctor or counselor are paid for, that food is always on the table and that, come Christmas, there are presents under the tree.

Rich's GOC chapter in North Carolina has adopted four children since the chapter was founded, though they hope to adopt two to three more come the holiday season. Currently those children are between the ages of four and 10 years old, though the group, made up of both men and women protect children up to age 18.

While searching for some print work one day, Rich was referred to 4imprint®. Then, while pricing tattoos and koozies, the representative he spoke to referred him to the one by one® program. Not long after signing up, the Mooresville GOC chapter was chosen to receive 250 pens, 500 tattoos for children and a tablecloth with their chapter emblem emblazoned on it, all of which help Rich and the other 20 chapter members carry out their mission. "If you can save one child," he says, "it's worth it."