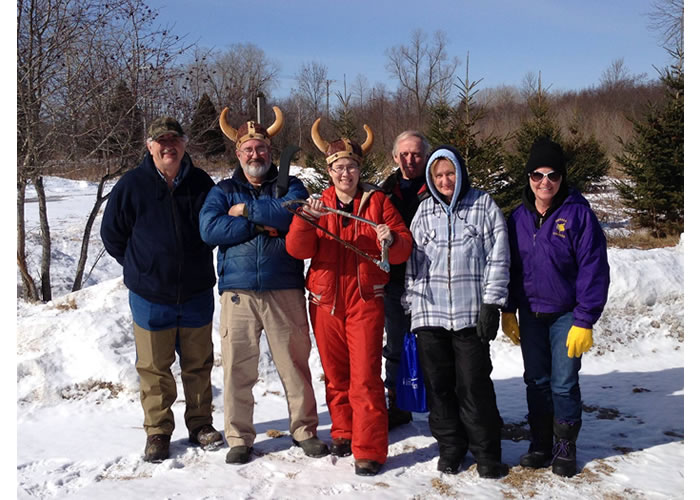 Woodland Dunes Nature Center and Preserve is a 1300-acre, nonprofit nature preserve in Manitowoc County that is dedicated to wildlife conservation. It is home to more than 400 species of plants, 260 species of resident and migratory birds and many other mammals, amphibians and invertebrates. As part of Woodland Dune's preservation efforts, a land restoration program was started earlier this year. This initiative, named, "Restore the Shore," involves a collaborated effort between Woodland Dunes and both the Lakeshore Invasive Species Management Area (LISMA) and the Lakeshore Natural Resource Partnership (LNRP). Together, they work to support this wildlife habitat and bird migratory by ridding it of invasive plant species. One might be surprised to learn that Woodland Dunes is protected by a team of Barberryans-and literally, they are. Named after the invasive Japanese Barberry plant, the Barberryans meet multiple times each month to survey the dunes and remove invasive vegetation and plant native foliage in its place. Typically, teams attack on Wednesdays and Saturdays, or as the Barberryan's call them, "Whack `em Wednesdays" and "Stop `em Saturdays." This year, the group tackled 40-acres of the preserve. "Though we weren't selected for a one by oner grant, we were excited to hear that 4imprintr was sending a donation of promotional products. We didn't know exactly what we were getting or how many, but we received a huge shipment of 200 cinch backpacks [which were] very appropriate and useful for our program," said Woodland Dunes land management coordinator Jeni Powell. The backpacks, along with a bottle of water and a granola bar were given to volunteers before they went into the field. "Everyone is grateful and impressed with the backpacks. They really worked out well," said Powell.

Miriam’s Hope
Learn more about their cause