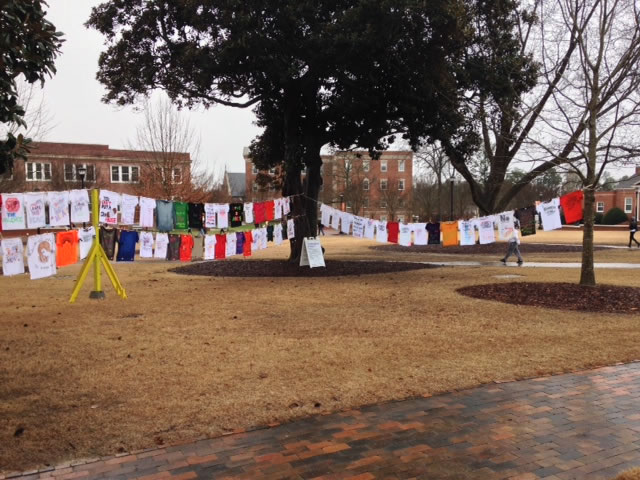 Each year, Campbell University devotes an entire week to address sexual assault across the university campus. The week is led by a cross-campus committee, and one of the goals is to create awareness and provide education on sexual assault. Different events are held on each day-it's a powerful week that generates a greater understanding about this important issue. The Clothesline Project is one event planned during the week. Each year, participants decorate shirts to honor those affected by sexual assault and/or domestic violence. The T-shirts are displayed on a clothesline in the middle of campus to represent the number of people affected by domestic or sexual violence. Participants often stand at the clothesline and read the impactful stories of survivors of violence and other community members. The Clothesline Project was a recipient of a 4imprintr one by oner grant that provided hundreds of T-shirts for members of the university community to decorate and be displayed on the clothesline. Amy Johnson, contractual counselor at Campbell University's Counseling Services received the news and immediately shared it with her team. "We had no idea there'd be so many T-shirts donated-there were eight boxes in total-we were so grateful." The donation enabled The Clothesline Project to have a powerful impact across campus. T-shirts were decorated by participants to create awareness or to recognize someone they knew that was a survivor of sexual violence. But according to Johnson, the T-shirts were most important because they became a confidential vehicle for people to share their stories. "The T-shirts gave a voice to people that might not normally speak out-it was a powerful way to share their experiences," said Johnson.

Peyton’s Promise
Learn more about their cause