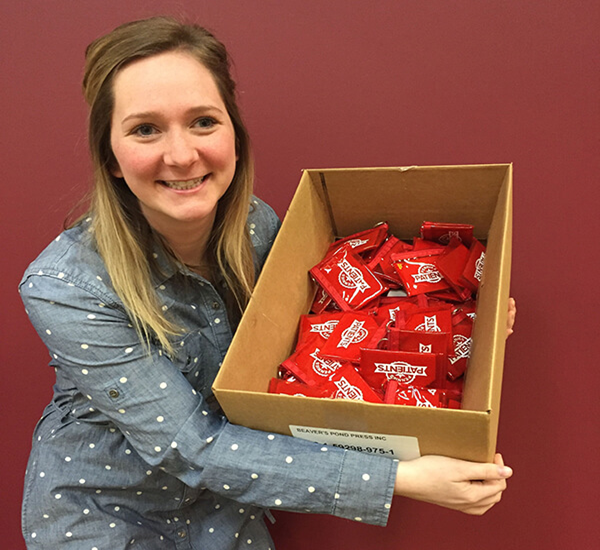 When identical twin sisters from South Dakota were diagnosed with an aggressive form of leukemia, their family received financial assistance from The Leukemia & Lymphoma Society (LLS), Minnesota Chapter, to help defray the cost of travelling to and from the Mayo Clinic in Rochester, Minn. The girls achieved remission and were able to return home, so the family became involved in speaking to schools in South Dakota about the importance of the LLS mission. When one of the girls relapsed, an elementary school they visited sent letters, pictures and cards to remind the girl and her family that they’re not alone. That’s at the heart of what LLS does, says Alli Rekow, campaign manager for the organization. “It’s that ability to make connections between our organization and these families that are going through such a difficult time, and their communities. That’s one of the most impactful things we do here.” While your spare change may seem to be a nuisance in the corner of your handbag or in your wallet, for LLS spare change is leading to real change. As a recipient of a 4imprint® one by one® grant, the Leukemia & Lymphoma Society, Minnesota Chapter was able to order coin purses, which they used as thank you gifts for key fundraising campaign contributors. The custom coin purse has become a valuable tool for generating support for LLS’ annual Pennies for Patients fundraiser. It’s a campaign aimed at fundraising through spare change collection in schools. “Our motto is that every penny counts,” Rekow said. “Because even if you only have a little bit to give, when everyone chips in you’re able to make a big difference.” Digging in your coin purse makes a big difference, indeed. The Pennies for Patients fundraiser is one of the largest annual campaigns for the Minnesota chapter. More than 900 schools are registered to participate this year, with a goal of raising $850,000.