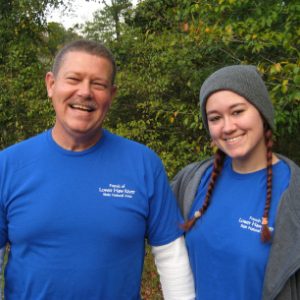 For nature-lovers in Chatham County, North Carolina, recycled promotional products are making a fashion statement for volunteers who beautify riverbeds. As a local chapter of a statewide organization called Friends of State Parks, Friends of Lower Haw River State Natural Area found a way to thank volunteers who are giving their time to clean up trash that gathers near the Haw River. “One of the reasons we formed our group is that even though this is a state natural area, state parks consider it undeveloped,” explains Gretchen Smith, president of the Friends of Lower Haw River State Natural Area, who says the area has no official hiking trails or paddle launches, though it’s popular with outdoors enthusiasts. “There was a lot of interest in forming a local group that could help support the state natural area.” Litter was a predominant issue the group wanted to tackle, Smith said. As a result of storm water runoff and widespread use of the property, trash needed to be collected at popular access points. State Parks agreed to donate trash bins if the group could find volunteers to do the cleanup and empty the containers. “It’s worked out really well; we’ve even seen a decrease in the amount of trash on the ground from recreational use,” Smith says. “We wanted to do something nice for the volunteers who are doing this, because it’s hard work, and sometimes it can be kind of grungy,” Smith explains. “There’s some stuff that’s not so nice to deal with.” As a recipient of a 4imprint® one by one® grant, Friends of Lower Haw River State Natural Area ordered two promotional products, including an Adult 5.5 oz. Recycled T-Shirt for their volunteers, made of 50/50 recycled polyester/cotton. The polyester fabric is in fact made from the recycled plastic of about five bottles. For donors and other key supporters of the group, including board members, they ordered the Bayside USA Made T-Shirt – Colors – Screen. Smith says the volunteers were especially touched by the thoughtfulness of the gift and the connection to their vision for the recreational area. “They like the fact that they’re made with 50 percent recycled bottles.”