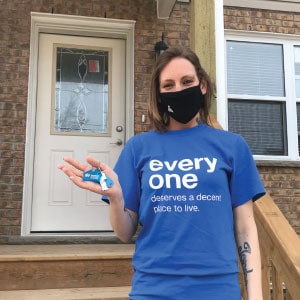 It’s a struggle for many—the inability to afford a home for a growing family or a move to a safer neighborhood. So imagine the relief felt by those who benefit from Habitat for Humanity Heartland Ontario, which builds new homes with affordable mortgages for those in need. After building a new home for a family or individual, who must also dedicate 500 volunteer hours to the cause, Heartland Habitat holds a key ceremony. On the big move-in day, the new homeowner is awarded their key attached to a keychain giveaway. Woman on front steps of house holding Habitat for Humanity keychain.The right house at the right time Single mothers comprise 37% of Habitat for Humanity Heartland Ontario’s new homeowners. Shayna, a single mother of two children aged 3 and 7, represents many of the organization’s clients. She works full-time at a factory while also attending school to become an electrician. In addition, Shayna was diagnosed with throat cancer. As she battled the disease, she continued work and school while also taking in a 16-year-old boy who needed care. Shayna quickly found herself in need of a larger home. That’s where Habitat Heartland came in, helping Shayna by building her family a new home with her needs in mind with an affordable mortgage. It’s more than just a keychain Habitat Heartland was planning to hold a conference in May 2020. It applied for and received 4imprint’s one by one® grant for keychains to use as conference giveaways. The keychain was designed to visually represent the organization’s good work. Then COVID-19 hit, causing the 2020 conference to be cancelled and moved to a virtual platform. However, the keychain giveaways didn’t stay in a box. “In the meantime, we’re able to give new homeowners like Shayna their own key with their own keychain. Before, we didn’t have anything that we knew they’d keep using again and again. And it means so much more than just giving them a bare key. It’s a little something extra that helps people truly feel like they have their forever home,” Senior Associate Kaitlin Crow said. And when Habitat for Humanity can hold an in-person conference, regardless of the host, Habitat Heartland will share the rest of the keychains with people from all over the country, spreading the Habitat message from coast to coast.

Miriam’s Hope
Learn more about their cause