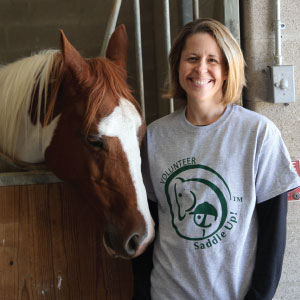 At age four, Connor couldn’t talk or walk without support due to developmental disabilities. His parents enrolled him in equine therapy at Saddle Up! hoping—but not expecting—it would help. At first, Connor was unable to ride his horse without a great deal of support because he lacked core and neck strength. However, as he came day after day, a dramatic transformation took place. Connor began to sit on his horse without support, and in four months, he spoke his first three words. At Saddle Up!’s SUPER Show, an awards show where riders showcase their riding skills in front of friends and family, Connor won an award. When his name was called, he stepped out of his walker and walked to the stage—it was his first time ever walking without assistance. Connor’s progress wouldn’t have been possible without Saddle Up! volunteers. See how volunteer giveaways show heartfelt appreciation to the volunteers who dedicate their time to children and young adults like Connor. Instilling hope and happinessWoman wearing a branded T-shirt standing next to a horse. With a 16,000-square-foot indoor riding arena on a 34-acre farm, Saddle Up! serves children and young adults ages 2 to 26 who have autism, cerebral palsy, emotional and behavioral issues, and developmental disabilities. Last year, 156 riders were served each week. Many of the children and young adults spend a significant amount of time in therapy and doctor appointments, so their time at Saddle Up! feels less like work and more like fun. They also improve their core strength, posture, breathing, motor skills, confidence and social skills. Each rider creates a beautiful bond with their horse, who faithfully spends time with them and serves as a non-judgmental force in their lives. Saddle Up! riders also gain a strong sense of independence. They can talk to their friends about their hobby and what they’re good at, especially if their friends are involved in sports and other activities that they’re unable to participate in. Giving a hearty thank you with volunteer giveaways Every year, Saddle Up! hosts Volunteer Appreciation Week to show its volunteers how much they mean to the organization and to thank them for their service by showering them with food, gifts and awards. Saddle Up! wanted to purchase T-shirts for its volunteers, but the cost was too high. Thanks to a 4imprint one by one® grant, staff were able to order branded T-shirts as volunteer giveaways. “We have about 350 active volunteers. We could not do what we do without them. Any given rider may need two volunteers supporting them on their horse during a lesson, in addition to a leader and instructor. So, we have a huge dependance on our volunteers. The T-shirts were a great way to show our volunteers how much we love them—without taking dollars away from our mission,” Tricia Ward, development associate, said.

For more information about Saddle Up!, please visit https://www.saddleupnashville.org/ opens in new window